Why a Four-Year Degree from a Michigan Public University?

The long-term demand for college-educated individuals is reinforced by the Michigan Hot 50 High-demand, High-wage Careers through 2026, which shows that 36 of those professions require a bachelor’s degree or higher – and those tend to pay better than the jobs that do not require a degree.

National data shows that, on average, those with a four-year degree can expect to have much higher earnings and job security than those without. And that gap is growing, as employers increasingly seek to hire applicants who possess a four-year degree. 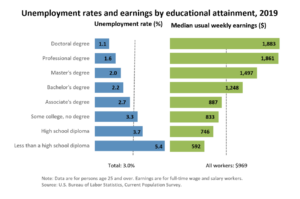 Earning a degree isn’t only about making more money, though. Research shows that those with higher levels of education beyond high school also enjoy much greater career and life satisfaction, lead healthier lives, and are more involved in their communities.

Those with a four-year degree are more likely to say their employment is a true career, not “just a job,” and tend to be more satisfied with their current job and their preparation for their next job.

The bottom line: Data shows earning a four-year degree is likely to earn you more, help you avoid unemployment, give you more job satisfaction, and even help you live a healthier life.

The cost of tuition is a major concern for students and parents’ college decision-making, but with scholarships and grants, the cost of attending college decreases by an average of 40 percent. The investment made in a four-year degree will pay for itself and provide Michigan residents with a stable, rewarding career.